Yesterday morning I was taken aback by quite how deeply sad I felt to wake to the news that we are leaving the EU. My sadness stemmed in part from the realisation of quite how separate we can become from people who seem to think differently from us; as the day wore on, I had the same conversations and saw the same expressions of feelings of loss, disappointment and astonishment. Missing were the voices of the almost equal proportion of people who voted the other way. A referendum in its nature is designed to split people in two, and this one appears to have been particularly effective at catalysing and strengthening division.

I’m especially saddened by this sense of increasingly sharp and painful division since recently I’ve actually been seeing incredible examples of the exact opposite of this phenomenon. 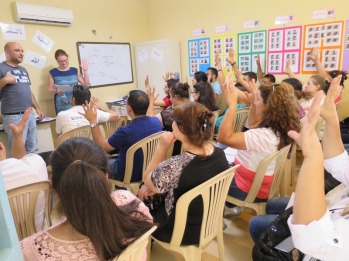 In Lebanon, we’ve started a network for churches who’ve begun informal education projects for Syrian refugee children, a much needed response where more than half of Syrian children remain out of school. Lebanon isn’t a place where working together across churches and denominations always comes easily, and in fact it feels somewhat miraculous that people are so excited about meeting together and helping each other.

Closer to home, I spent the two days before the vote at the NSPCC’s annual conference. I was shocked by the huge and rapidly growing scale of the issue of online child sexual abuse; in the last year alone, the Internet Watch Foundation (IWF) removed 68,000 separate URLs containing images of child abuse. But what was encouraging was the scale and depth of the response to this issue; sitting on the discussion panel were representatives of the police, IWF, Google, and an academic, whose united response has made the UK now one of the most difficult places in the world to access child abuse images.

In both of these situations, we’re witnessing people who shouldn’t or wouldn’t normally choose to connect with each other, overcoming that which could divide them because they recognise that the issues they are faced with are worth tackling, and can only be solved, together.

In our current situation I think it’s important not to become closed off from what we might be tempted to see as a group of ‘other’ people totally not like ‘us’. It seems to me that one of the factors at the heart of the EU debate was a sense of anger and distrust because of a growing distance between politicians and people, a sense that decisions are made which don’t have the best interests of the most vulnerable at heart, and a frustration that it feels that there’s little we can do about it. Oliver James, an author and child psychologist speaking at the NSPCC conference commented,

‘There has to be a total change in our society… we need to become a nation that puts wellbeing ahead of greed.’

I hope that however we voted, we can choose to look beyond the pervasive rhetoric of fear, anger and hate, and begin to untangle the knots and find one another again. I hope we can make a choice to connect with people we wouldn’t normally interact with, and take this opportunity to listen, talk, understand, reach out, and not simply close off. I would like to choose to remain engaged, remain caring, remain hopeful, and remain in relationship.

The most compelling example of remaining in difficult circumstances I’ve known in recent months is that of our team in Syria running a child friendly space in an area that is deeply affected by conflict and insecurity – they have chosen to stay and continue to engage, where many others would have left. And one year in, we are seeing remarkable evidence of impact in the lives of the children they care for day in, day out.

To me, this team of young people represent hope in a situation that many see as only filled with despair. Let’s not let this week’s decision take us away from focusing on the issues that are really important and really demand our attention, thought and action, and let’s look for ways to remain connected and work together to ensure that our society is one that is good news for those who need it most.